“If a disease were killing our children at the rate unintentional injuries are, the public would be outraged and demand that this killer be stopped”

The health of children has changed significantly during the past 50 years. Widespread immunization programs have nearly eliminated the threat of infectious diseases, such as polio, diphtheria, and measles. However, a major public health problem that continues to threaten the health of all children has no vaccine: injury. Child injury represents one of the most immediate public health threats, resulting in the death of nearly 2000 children under age 14 every day around the world. (http://www.who.int/healthinfo/global_burden_disease/estimates/en/). According to Margaret Chan, former Director General of the World Health Organization (WHO), and Ann Veneman, former Executive Director of the United Nations Children’s Fund [1]:

Once children reach the age of five years, unintentional injuries are the biggest threat to their survival. Unintentional injuries are also a major cause of disabilities, which can have a long-lasting impact on all facets of children’s lives: relationships, learning and play. Among those children who live in poverty, the burden of injury is highest. Child injuries have been neglected for many years and are largely absent from child survival initiatives presently on the global agenda. The World Health Organization, the United Nations Children’s Fund and many partners have set out to elevate child injury to a priority for the global public health and development communities.

In the compilation of 23 papers from this Special Issue of the International Journal of Environmental Research and Public Health (IJERPH) [2], we review the burden of childhood injuries, discuss effective interventions applied to specialized target groups around the world, and focus on methods to bring interventions into practice settings with an eye toward the use of theoretical approaches and program evaluation. Some papers in this Special Issue focus on epidemiology and surveillance, some on clinical and community intervention and many generate new knowledge that may help curb the problem in the future. Some papers discuss the need for translational research from discovery to delivery, and in transmitting knowledge for change from one setting to another. All except two focus exclusively on unintentional injuries. 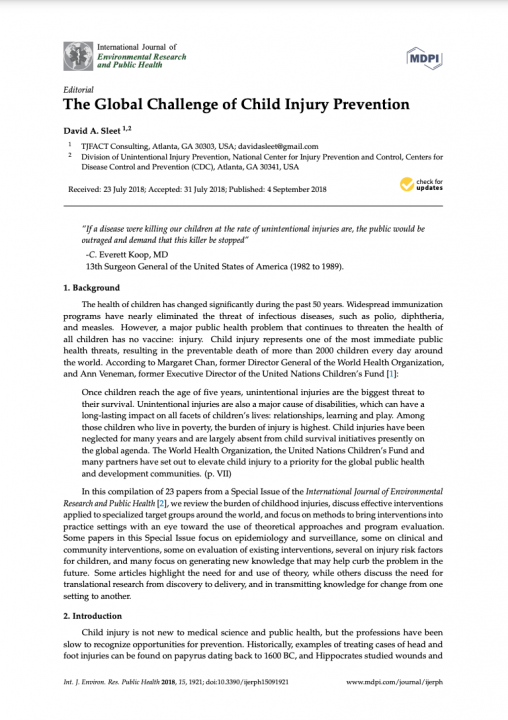