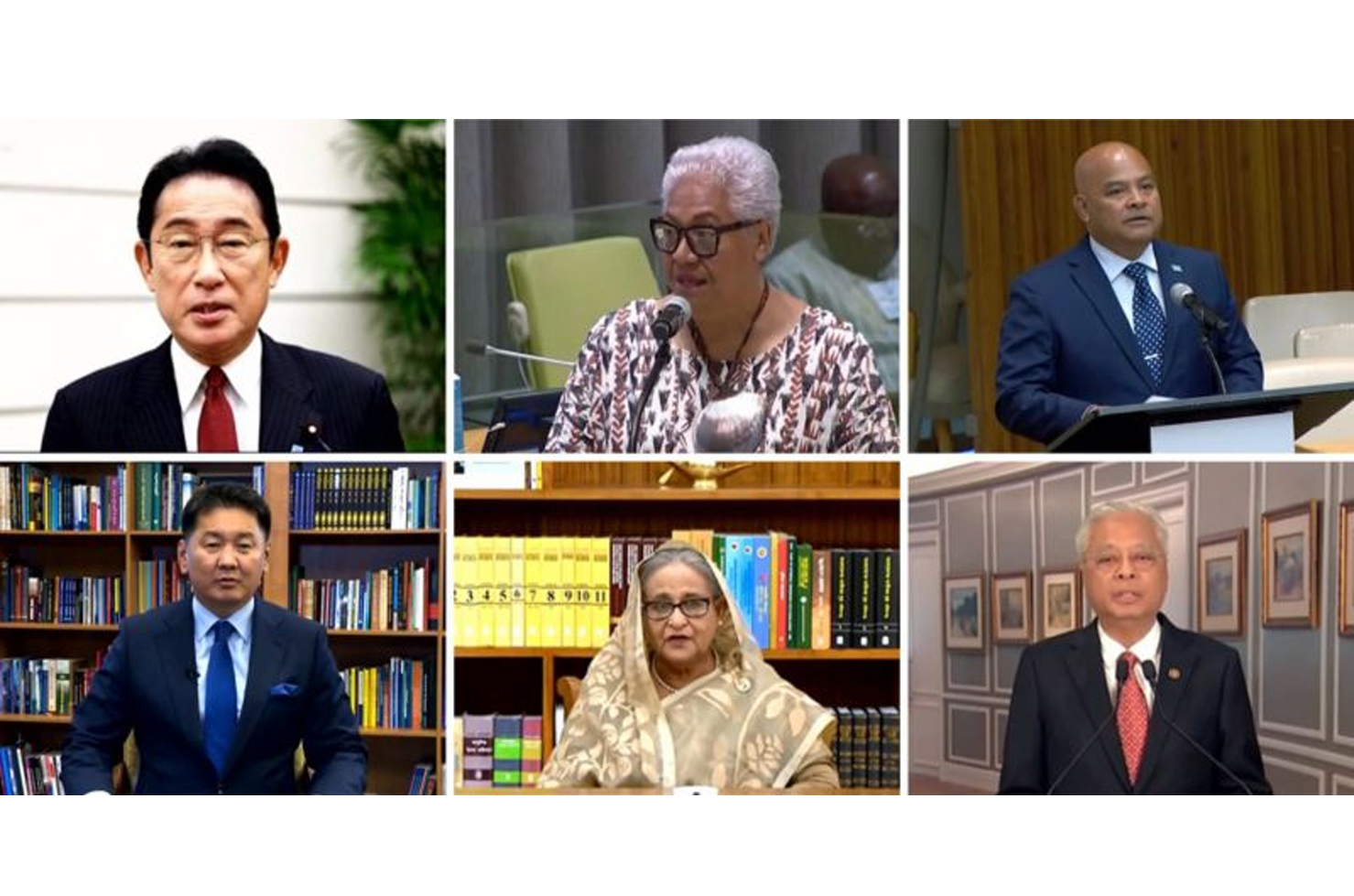 Heads of State gathered in conjunction with the UN’s 77th Session of the General Assembly to renew their commitment to transform education and accelerate all efforts towards achieving SDG 4 at the Transforming Education Summit (TES) in September 2022.

The year 2022 marks a historic moment for education, given the momentous gathering of global leaders for the Transforming Education Summit (TES; 16, 17 and 19 September), which was hosted by UN Secretary-General António Gutteres in conjunction with77th Session of the UN General Assembly (13-27 September 2022).

The Transforming Education Summit (TES) was convened by UN Secretary-General António Guterres in response to the global crisis in education. As part of Our Common Agenda to elevate education as a top global political agenda, the TES aimed at mobilizing ambition, action, solutions, and solidarity to deliver on existing education commitments. The Summit and its lead up generated reflection and action at national, regional and global levels which initiated a movement towards transforming education.

In Asia and the Pacific, thousands of education stakeholders, including Government representatives, civil society representatives, teachers, academics, development partners and youth engaged in national and sub-national consultations to prepare for the Summit, and to ultimately contribute a regional perspective to global conversations on transforming education and education systems.

A milestone in the lead-up to TES was the 2nd Asia-Pacific Regional Education Minister’s Conference (APREMC-II) hosted by UNESCO and regional partners in Bangkok from 5 to 7 June 2022. APREMC-II brought together more than 300 education stakeholders, including 24 high-level education ministers from regional Member States and Thailand’s HRH Princess Maha Chakri Sirindhorn from across Asia and the Pacific.

APREMC-II highlighted the urgency to take action to ensure immediate learning recovery, to address the learning crisis both individually and collectively, and to get SDG 4 implementation back on track. The Conference also provided an opportunity to reflect on the urgent need for a broader transformation of education systems, both regionally and through preparatory processes leading towards the Transforming Education Summit. The main outcome of the Conference was the commitment of education ministers and key education stakeholders of the region to take urgent action for learning recovery and education transformation, as expressed in the Bangkok Statement 2022.

The Transforming Education Summit of the UN’s 77th Session of the General Assembly mobilized action, ambition, solidarity and solutions with a view to transforming education between 2022 and 2030. Over the course of 3 days, global, national, and local education stakeholders and related actors convened for an inclusive, networked and effective global dialogue on the types of coordinated actions needed to reverse the slide on progress towards SDG 4. Discussions centered around lessons learned from pandemic responses, and participants were stimulated to think big on how world leaders might imagine education systems of the future.
As of October 2022, more than 160 national consultations had been undertaken in the lead-up to the Summit; others are still underway, while 128 countries have submitted their National Statement of Commitment, 26 of which have come from UN Member States in the Asia-Pacific region.

According to submitted Statements, most countries in Asia and the Pacific are committed to immediately prioritizing learning recovery and, in the longer term, putting in place strategies to address the learning crisis and transforming education. Many countries underline the need to focus on reaching the most marginalized and vulnerable learners who are most at risk of never returning to school, or likely to drop out. Many countries highlight the need to address issues related to curriculum reform, teacher development, financing of education, and digital learning.

The Statements have underlined the need to transform education systems so that learners are prepared for life and work and contribute to peaceful, inclusive and sustainable futures of humanity and the planet in an era that is characterized by constant and rapid change.

The Secretary-General’s Vision Statement, released at the Summit itself, calls for 'rethinking the purpose and content of education in the 21st century’. The Vision Statement will also serve as input to negotiations in preparation of the Summit of the Future to be held at the UN 79th Session of the General Assembly in September of 2024.

The Vision Statement also highlights the important role of the SDG 4 High-Level Steering Committee (HLSC), co-chaired by UNESCO and Sierra Leone, which will play a key role in the follow-up to the Summit. The HLSC is composed of 28 members, 18 of which represent the six regions of the world, with two countries and one inter-governmental regional organization per region. Representing the Asia-Pacific region is Bangladesh, China, and the Southeast Asian Ministers of Education Organization (SEAMEO). On the TES youth-led and youth-organized Mobilization Day, of 16 September, teachers, civil society actors, Member States, the private sector and other stakeholders all engaged in dialogue with youth towards education transformation. Youth engagement was an important component of the process leading up to the Summit. At TES itself, youth advocates shared a Youth Declaration with the UN Secretary-General, laying out their collective recommendations on the transformation of education they want to see, along with their commitments for action.

On the Leaders Day (19 September) of the Summit, six Spotlight sessions highlighted a cross-cutting priority and called for political support for action.[1] A Commitment to Action on ‘Education in Crisis Situations’ was also introduced, as well as calls to action on ‘addressing the learning crisis by boosting foundational learning’; ‘advancing gender equality through and in education’; and a ‘Greening Education Partnership’ developed in response to the Secretary-General’s characterization of the climate crisis as ‘a battle for our lives’. As a result, 6 global initiatives were launched at the Summit, including youth empowerment as a follow-up on the Youth Declaration.

To ensure accountability towards the Summit’s Global Initiatives, the SDG 4 HLSC will call on countries to build on the national SDG 4 benchmarking process by:

For the Asia-Pacific region, the Learning and Education 2030 + (LE2030+) Networking group, which serves as the regional SDG 4 coordination and monitoring mechanism and is co-chaired by UNESCO Bangkok, UNICEF EAPRO and UNICEF ROSA, will be leading the follow-up on TES at the regional level, together with partners and Member States, all to ensure the linkage between TES follow-up and SDG 4 implementation, as well as to monitor progress.

UNESCO, in close collaboration with members and partners of the LE2030+, will establish a regional programme to support countries in Asia-Pacific in their efforts to deliver on their commitments to transform education as stated in the Bangkok Statement 2022 and their National Statement of Commitments expressed at the Summit.

‘Education is the cornerstone for a prosperous, stable and secure future for all. An educated society is an informed society that stands to make better decisions’. — Papua New Guinea

‘The summit provided an opportunity to once again reiterate our collective call to put education front and center for our inclusive and sustainable development for ALL’. — Tonga

[2] The six Spotlight sessions focused on:

*This news article was first published on UNESCO Bangkok website

An Asia-Pacific vision of education recovery and transformation: The ‘Bangkok Statement 2022’
#GSSD2022 | Accelerating Learning Recovery and Transforming Education in South-East Asia through Multi-Stakeholder Partnerships (SDG 4)
Call for Consultancy: Communications Consultant for SDG4
Situation Analysis on effects of and responses to COVID-19 in the education sector in Asia Webinar
Asia-Pacific Regional Online Consultation on the 2020 Global Education Meeting (GEM) Declaration